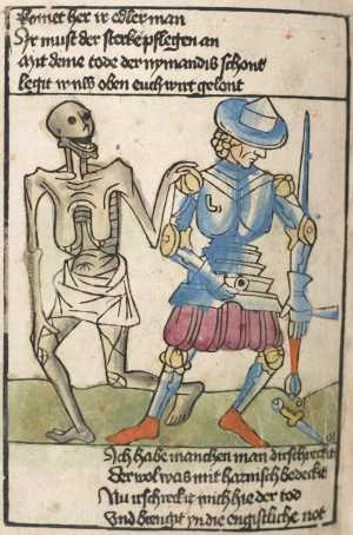 Text translated:
"Representation between two text blocks: above four-line salutation of death to the nobleman, below the nobleman's complaint. The illustration shows Death with two hanging breasts and an apron around the loin, who has put his right hand on the right knee to start running, while he has put his left hand on the nobleman's shoulders. The nobleman, in full armor, turns his head to the opposite edge of the picture. He holds a coin with the gloved fingers of his right hand, a sword standing on the pommel behind his arm, his dagger lying on the ground." (Translated description from the University of Heidelberg University Library (Germany),
https://digi.ub.uni-heidelberg.de/diglit/cpg438/0282/text_heidicon,
DOI Page: https://doi.org/10.11588/diglit.236#0282)

"Text in German and translation (From "The Dance of Death" webpage, http://www.dodedans.com/Eheid16.htm):


"Death has been equipped with a pair of sagging breasts. If nothing else, it goes to show that Death isn't one single character. In Lübeck's dance of death one might imagine that Death was the same figure, who were skipping around in the dance, but not so in Heidelberg. This is not Death's dance, but a line of the dead.

I does lend some weird under-tones to the text when Death comes in the figure of a woman. It's not unusual in the dances of death for Death to challenge a warrior to "the final fight", but here the nobleman has to "nurse his strength" with her, "who spares no man", and he'll be "rewarded if he lies on top". A little less than hundred years later, Hans Holbein copied the idea of showing how Death in the form of a frail woman has power over even the strongest warrior (see the letter I)." (Description and analysis from "The Dance of Death" webpage,
http://www.dodedans.com/Eheid16.htm)

Also found in "The Dance of Death" webpage:
http://www.dodedans.com/Eheid16.htm

This item has no relations.