Images of penitents, eremites, saints and other human figures in meditative situations in which a skull or other human remains are used as props for their meditation

The male and female penintets and saints are accompanied by human bones whose gender is unidentifiable. Since the function of these bones is to remind them of their mortality and their imminent future, the remains are supposed to be as similar to themselves as possible, which would include being equally male or female. Although indeterminacy regarding the sex of the remains before death seems to be the norm in the paintings, the way the penitants and saints relate to the remains, how they handle them or next to what they place them may imply that they conceive them as male, female or neutral 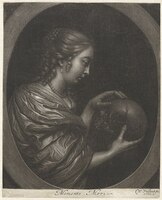 A young woman, who is well dressed and wearing a pearl necklace and earrings, holds a skull in her hands while she stares at it. 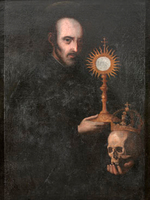 In this portrait of Saint Francis Borgia, he appears holding a skull with a crown. The skull is that of Queen Isabel of Portugal. Queen Isabel's beauty was greatly admired by Saint Francis, however, she died at a young age. Just before burring her… 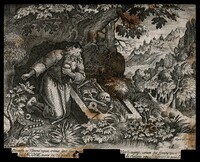 This engraving represents the scene when Saint James the hermit looks at a female skeleton. This is one of the few cases where the skeleton's gender is identified as feminine, and this can be seen in the lettering: "Dextera ne flamma(m?) rapiat,…

A young woman contemplating a skull, by Casolano (1592)

The image represents a young woman holding a skull and looking at it. The skull is represented without specific gender traits (i.e. hair), thus, it is very difficult to identify its gender. 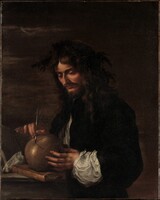 This work is a self-portrait of the artist. In it, the artist appears writing on a skull that is stripped of any gender traits.

The image represents saint Jerome covered from waist down with a red cloth, kneeling and looking up at an angel. On the right of the image, a skull with no visual gender traits rests on top of a book. 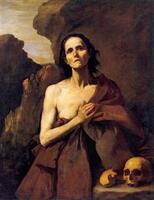 This image represents Saint Mary of Egypt. She is depicted with her hands folded in front of her chest and covered with a cloth. On the right there is a skull with no visual gender traits and another piece of bone. 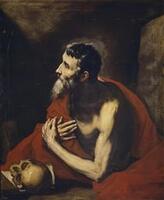 This image represents Saint Jerome with his hands crossed in front of his chest, and covered by a red cloth. In front of him, we can see a skull with no visual gender traits. 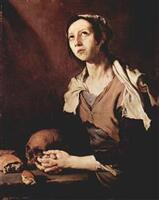 This image represents Saint Mary of Egypt. She is depicted holding her hands, and resting these on a table. On her right on the table there is a skull with no visual gender traits and another pieces of bone. 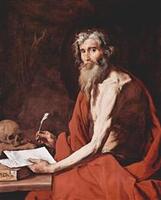 This image represents Saint Jerome covered by a red cloth. He holds a paper on his left hand and a quill on his right. On the left, we can see a skull with no visual gender traits.
View all 21 items